The Inflation Reduction Act of 2022 will increase the IRS’ budget by $80 million over 10 years. What does that mean for you?

In short, it gives the IRS the funding for personnel to conduct more tax audits. That means if you’re already at risk of an audit, the chance of you getting one in the next few years could substantially increases with the passing of this act.

Fortunately, an IRS tax audit isn’t the end of the world — especially if you’re educated and prepared. Here’s everything you need to know about what a tax audit entails and what might put you at more risk of one.

What Is a Tax Audit?

A tax audit involves the IRS looking into your taxes and finances to make sure everything has been reported correctly. They’re usually conducted because the IRS system has flagged something unusual about your tax return.

For some people, tax audits catch omitted or untruthful information. For most, the audit system flags honest taxpayers because their tax forms don’t match the norm. They could have a high income or an unusual amount of expenses that the IRS wants to check closer.

What Happens During an IRS Tax Audit?

An IRS tax audit can look very different, depending on what the IRS is trying to verify or uncover.

A simple audit notice may mean that the IRS simply sends you a letter saying you owe more money. This is because they’ve already investigated your taxes and discovered that you owe more money than you may have reported, usually due to a mistake.

A correspondence audit may mean that the IRS is requesting documents from you to verify what you’ve reported. This could be anything from expense reports to bank statements.

More serious audits could involve office interviews or field reports. For an office interview, you would be required to come and visit the IRS in person to discuss your taxes.

Field audits are rare, but they happen. For example, if you’re claiming a large home office on your taxes, the IRS may want to come out and verify that this room is indeed there and only used for work purposes.

What Happens After a Tax Audit?

The conclusion of the audit depends on what the IRS finds. They may agree with you that the return is accurate, and no further action will be taken.

Otherwise, they may find that something was missing and charge you fines, penalties, and additional tax. In rare cases, someone may face time in prison for tax evasion,  though this is for people who’ve lied about or hid hundreds of thousands of dollars.

What Should You Do if You Get Notice of an Audit?

It’s also highly advisable to get a tax professional on your side that will support you in the case of an audit. We are proud to help you in case of an audit on any tax returns we’ve prepared for you – you can find our contact link at the bottom of this article.

You should also make sure that your tax professional is within your budget, but beware — going with someone alarmingly cheaper than the rest because they don’t have as much experience could result in you losing more money in fines and fees if an audit does happen.

There are specific things in the IRS system that can trigger an audit. Being flagged for these doesn’t necessarily mean you’ve done anything wrong — it’s just that tax returns with these qualities often spark further investigation.

Those with incomes over $500,000 and under $25,000 are much more likely to be audited. High earners are more likely to claim a lot of expenses because they’re in a higher bracket and may not want to pay that much tax while low earners could be lying about their income to do the same. In our experience, having received the Earned Income Credit also makes you more at risk of an audit.

Income Inconsistent With Your Profession

If the IRS system thinks that your income is inconsistent with your profession, this could also cause an audit.

For example, if a customer service agent makes $30,000 a year on average, but you, as a full-time one, claim to earn $15,000, this might seem strange to the IRS and it might seem like you’re trying to avoid taxes.

If you do make an unusual amount of money for your profession, keeping paystubs handy and W-2 or 1099 forms can help clear up the confusion quickly. The IRS receives a copy of these too, but it never hurts to have them.

If you work from home, then you’re allowed to claim a portion of your workspace on your taxes using either a simple or more complex method — depending on what works best for you. This is called the home office deduction. However, be prepared to prove this is legitimate, as the IRS scrutinizes home offices due to the fact this deduction has often been abused.

Other than checking that you reported the size of the office correctly, the IRS is interested in the use of the space.

If you’re entitled to this deduction, you should absolutely take it — but only if you’re sure.

You’re allowed to write off a portion of your vehicle on your tax return if it’s used for business, but very few people use their car just for work. If you’re claiming the whole thing on expenses, it might prompt the IRS to look into that.

If you do use your vehicle heavily for work, tracking the mileage can be a huge help.

Because charity donations are tax deductible, some people might try to claim more of than they give. You should always ensure you keep a record of what you donate to charity, as well as a receipt.

This is especially a red flag if the donations are high in comparison to income. It might be more believable that someone earning $300,000 donated $2,000 to charity over the course of the year than someone who earned $15,000.

High expenses are another audit red flag, as these can get you out of paying more taxes.

This doesn’t mean that you shouldn’t take all the expenses you’re entitled to if they feel excessive. Just make sure they’re legitimate for business use and then keep the receipts and credit card or bank statements.

It can help to keep a separate credit card for business expenses so you can quickly pull up records.

Perhaps the most obvious red flag is income you haven’t reported. Although some people might think they can get away with leaving that short contract job off their tax form, this isn’t the case — the IRS receives a copy of every 1099 you do, so they always know how much income you’ve actually earned and their systems match it to your tax return.

An IRS Tax Audit Isn’t the End of the World

Although an IRS tax audit can be daunting, it isn’t the end of the world. Make sure you file you keep track of your expenses or have a way to automate it, and report everything 100% honestly — that way you know that if you get audited, there will be no penalty or consequences as you can back everything up.

If you’re a physician who needs some help with their taxes, contact us today, and let’s see what we can do for you. If we prepared your taxes, we will stand with you if the IRS sends you a notice. 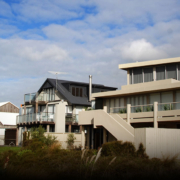 The Ultimate Guide to Owning a Short-Term Rental 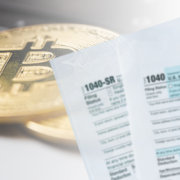 Cryptocurrency Has Unique Rules When It Comes to Income Taxes 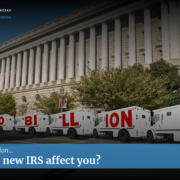 THE $80 BILLION QUESTION: How will the new IRS affect you?

THE $80 BILLION QUESTION: How will the new IRS affect you?

This site uses cookies. By continuing to browse the site, you are agreeing to our use of cookies.

We may request cookies to be set on your device. We use cookies to let us know when you visit our websites, how you interact with us, to enrich your user experience, and to customize your relationship with our website.

Click on the different category headings to find out more. You can also change some of your preferences. Note that blocking some types of cookies may impact your experience on our websites and the services we are able to offer.

These cookies are strictly necessary to provide you with services available through our website and to use some of its features.

Because these cookies are strictly necessary to deliver the website, refuseing them will have impact how our site functions. You always can block or delete cookies by changing your browser settings and force blocking all cookies on this website. But this will always prompt you to accept/refuse cookies when revisiting our site.

We fully respect if you want to refuse cookies but to avoid asking you again and again kindly allow us to store a cookie for that. You are free to opt out any time or opt in for other cookies to get a better experience. If you refuse cookies we will remove all set cookies in our domain.

We provide you with a list of stored cookies on your computer in our domain so you can check what we stored. Due to security reasons we are not able to show or modify cookies from other domains. You can check these in your browser security settings.

We also use different external services like Google Webfonts, Google Maps, and external Video providers. Since these providers may collect personal data like your IP address we allow you to block them here. Please be aware that this might heavily reduce the functionality and appearance of our site. Changes will take effect once you reload the page.